Having explained what I thought was wrong with Infinite Space, I feel obliged to talk about what it did right. In this context I’m going to discuss something lots of other games get wrong, from my point of view. Let me start with the proposition that games express values. That may seem trivial to anyone who has played through twenty or so JRPGs with the same neo-luddite earth-friendly themes, but I’m actually not talking about that kind of expression. Games also have intrinsic values that are communicated by the kinds of characters that are chosen as protagonists, the way that the plot evolves around them, and the systems with which the player affects that plot. In marked contrast to many notable JRPGs of the last decade, Infinite Space values intelligence and pragmatism. Because I share those values, I appreciated the game more, perhaps, than its gameplay and plot strictly deserved. 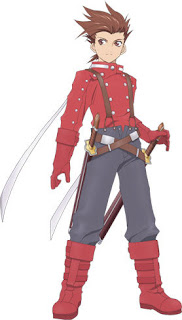 The most popular criticism of JRPG characters concerns the angsty pretty-boy heroes that were in vogue for a while, notably exemplified by Final Fantasy VII‘s Cloud Strife, but my personal distaste is generally reserved for heroes that belong to the “noble idiot” archetype. This kind of character is exemplified by Tales of Symphonia‘s Lloyd Irving, but also fits characters like Tidus from Final Fantasy X, and, in the world of anime, the title character of Naruto. Zephyr from the recent Resonance of Fate also fits the type to a degree.

This character is unintelligent and ignorant, often willfully so, and this is part of the appeal, from the perspective of a writer, because it provides an excuse for lengthy explanations about a world’s history or magical physics. In spite of his stupidity, this character tends to have a unique talent or a special gift that allows him to fight evil. And of course he’s really into fighting against evil (or fighting on his friends’ behalf), to the extent that these games often include a scene in which the character must be talked out of or physically dragged away from a confrontation against a force that completely outclasses him.

The noble idiot is usually motivated by a certain naive optimism about the human spirit, believes that “good” will win out, and is reluctant to compromise his ideals in order to achieve his goals. He is especially unwilling to tolerate injustice, and will either entirely lack or easily give up any bigotries he possesses. A certain prettiness is also characteristic, although these characters tend to be more rough-and-tumble than the emo princes.

Yuri, the protagonist of Infinite Space, actually starts off somewhat in this vein, with an effeminate appearance and a naive willingness to help out the powers-that-be against local pirates and whatnot. What I found interesting was that, almost from the beginning of the game, the supporting cast make it clear that this tendency is not desirable and is something he should beat out of himself. His early efforts to deal with situations by charging in recklessly result in his getting blown up and stabbed in the eye. He recovers from the physical damage and learns from the experience, which is, ironically, a bona fide rarity in a genre of game that traditionally tracks skill using “experience points”. By the time we reach the second part of the game, Yuri is both willing to become a pirate himself in order to serve a larger purpose and intelligent enough to play galactic powers against one another in order to get what he desires.

It helps that most of the conflicts in the game are presented in shades of gray. The empire Yuri struggles against is brutal and repressive, for instance, but in many ways conditions improve significantly in the sectors it takes over, alleviating food shortages and pirate attacks. Confronted with this truth by a former ally, Yuri agrees to disagree rather than spewing a bunch of nonsense rhetoric. He understands why his old friend made the decision and respects the idea that people can disagree with him.

In this and many other ways, Infinite Space convincingly values intelligence. Its main character, though a bit foolish early on, learns from his experiences and fights smarter, not harder. Most of the supporting cast have sharp minds, and are able to contribute to the success of their missions because of their intelligence. That’s something I like to see, because I value intelligence, too. A game that stars a noble idiot can be very good, and I like many of those games, including Tales of Symphonia and FFX. However, it’s always more difficult for me to connect with a character who doesn’t share my values. I am never satisfied with ignorance, neither my own nor that of others. A game that mirrors those sensibilities will always appeal to me more than one that does not.

3 Responses to “Who wants to be Lloyd Irving?”

Sorry, the comment form is closed at this time.